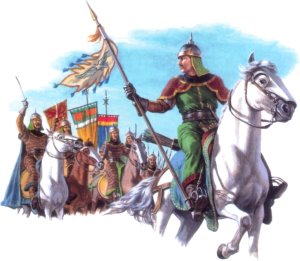 Tribal and nomadic, the ancient Mongols of the 12th Century were the most feared warriors in Central Asia. Many say that they derived their incredible strength and stamina because of their natural diet. With no home to speak of, the land was their provider.

During this time the Mighty Kublai Khan (Genghis Khan) and his fierce warriors ravaged these lands for territory and riches. They reaped the lands of Asia and horded the treasures of humanity, the souls of the weak, and the feasts of Champions…

Hunters of the day and gluttons of the night, these gladiators of the East were often on the move. They fought for long periods of time, under pressure and on the run. They often camped along the great river Khan-Balik as their source of refreshment, but hunted the lands and livestock of surrounding villages and forestry for the banquets they prepared during every meal.

They would gather on the banks of the great river, and feasted together in celebration of their hard fought glory. They would commune in banquet style pavilions and prepare large quantities of various foods to choose from. They would prepare vegetables, fruits, spices, herbs, sauces and long, thin slivers of meat from their days of hunting. These slivers of meat were carved from the carcasses of the day's hunt by the very swords and knives they fought with, slicing and dicing their evening's meal.

They piled their food high upon their war shields, and cooked them over large bonfires on a hot griddle. This stir fry style feast, became a natural way of eating from day to day for these hardened people with their fast-paced lifestyle.